Conducting the 9 day consulting package in a mountainous area 31km away from Ninh Binh province center was a challenge for us! On the 1st day of the training course in a series 9 working days, many participants lamented that it was too long for them because they still had their own business while nature disaster is the Nature’s job! The training room was not like a normal one, with no table, no projector and the participants were seated in circle facing the boards made from used backdrops, all of which made them inattentive, gossiping with their mates or surfing their phones.

So, what turned this into an interestingly positive one right on the 2nd day?

It was the participatory training and facilitation method with visually attractive lessons illustrated on big size papers (A0), color cards being used in group discussions, play and role-plays that engaged them throughout the 5 day training. Not only that, the participants  who were also members of the assessment team participated in the discussion and together with the organizers made decisions to revise the drafted disaster risk assessment plan for the disaster risk management planning in the next 4 days. The work was performed smoothly thanks to the detailed information clearly visualized on A0 paper! The concepts of “Natural disaster risks”, ”Responding capacity”, ”Vulnerability” are learnt through the pictures 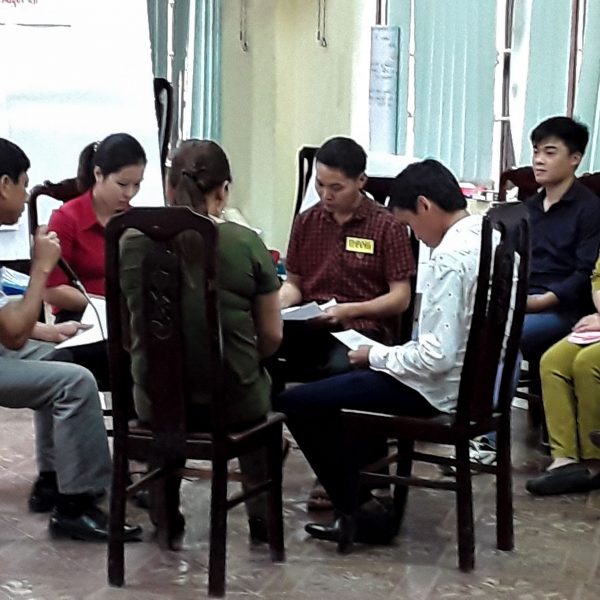 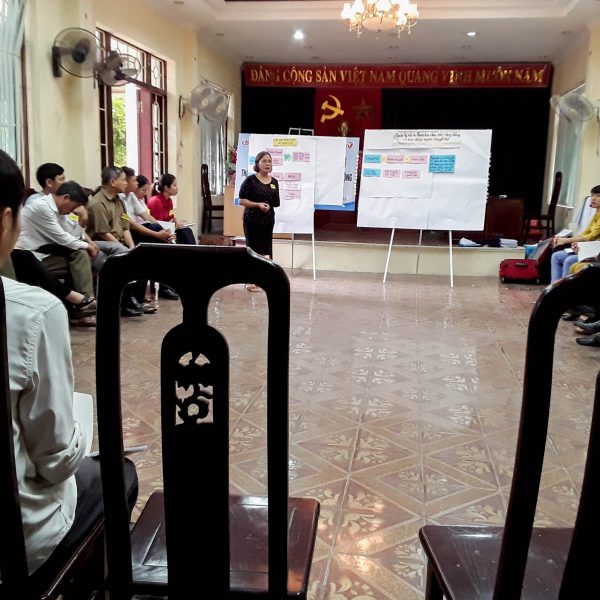 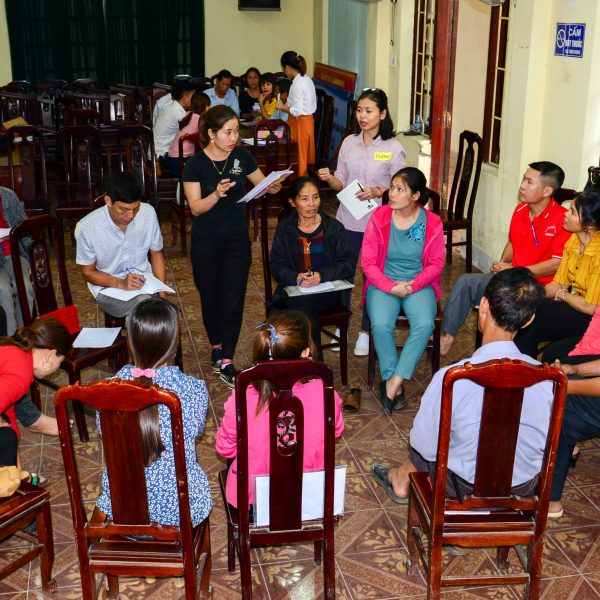 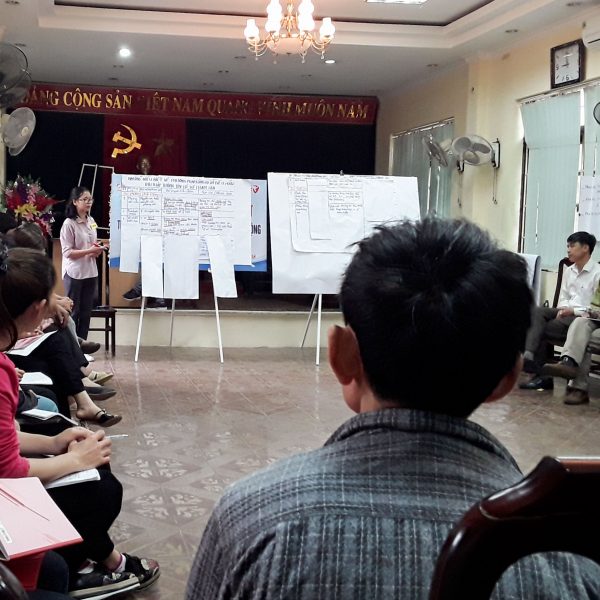 The 27 members of the 9 assessment teams were very worried before going to the village to collect information. They thought the villagers wouldn’t know what to share with them. However, the collected information is out of our expectations! Disaster risks and vulnerabilities caused by natural disasters in the context of climate change in 3 communes have been identified and analyzed specifically by the villagers. This was achieved because the group discussion used together with hazard mapping tool in which, the representatives of people with disabilities, children and the whole village in turn shared their opinions besides season calendar, priority rankings, problem trees, synthetic table and individual interview method with the semi-structured questionnaire tool were so applied. This makes the commune and village government officers who were the first time joining participatory information collecting, feel that they are totally capable of helping villagers confidently raise their own voices. As a result, many responding capacities have been identified by villagers. For example, many high-rise buildings in the village can be used as shelters; other villagers know some folk ways to take care the sick cattle during flooding season; some even realize that in the area of ​​growing neem trees, the soil is less likely to be eroded during flooding due to the soil retention ability of the neem roots. In addition, the village government officers said that, if instructed, they would be able to conduct the communication sessions directly to the villagers to improve their responding capacity without any financial pressure.  All of this information has been included in the natural disaster risk management plan for the next 5 years.

The 9 day training has come to an end. The sharing of the assessment team and villagers proves that participatory training and facilitation methods can help stakeholders work advantageously.  For examples, “Through these activities, I can enhance my teamwork skills”, “We work really hard, but we have learned so many things”, “We have worked as Heads of villages for over 10 years, this  is the first time we are able to learn and do such interesting things!”, “I am not sure when our needs will be solved, but that you are here to ask about our water shortage, makes us all happy”, “I am a person with disability, evacuating alone on a muddy road when flooding is very scary to me. Now I am more than happy when my name is in the priority list of evacuation”. 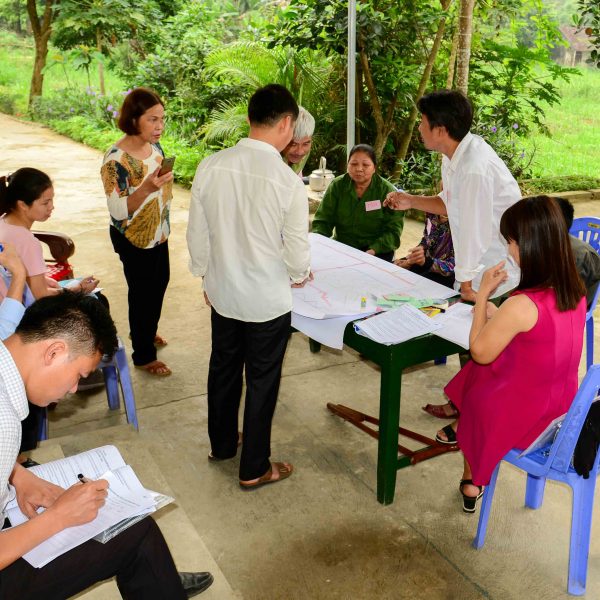 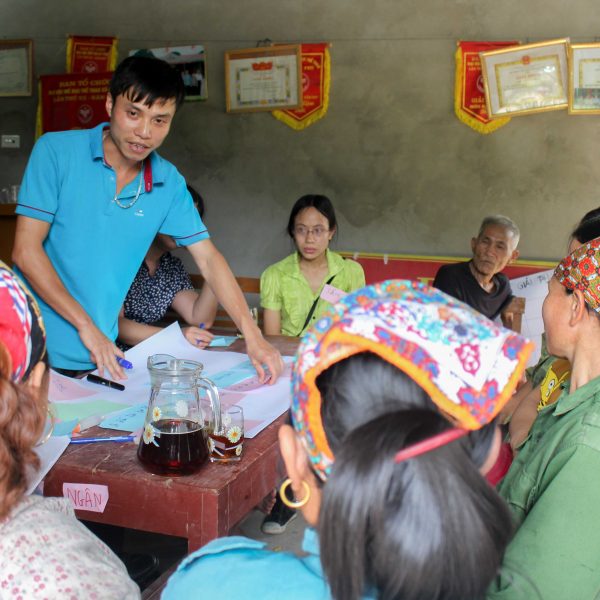 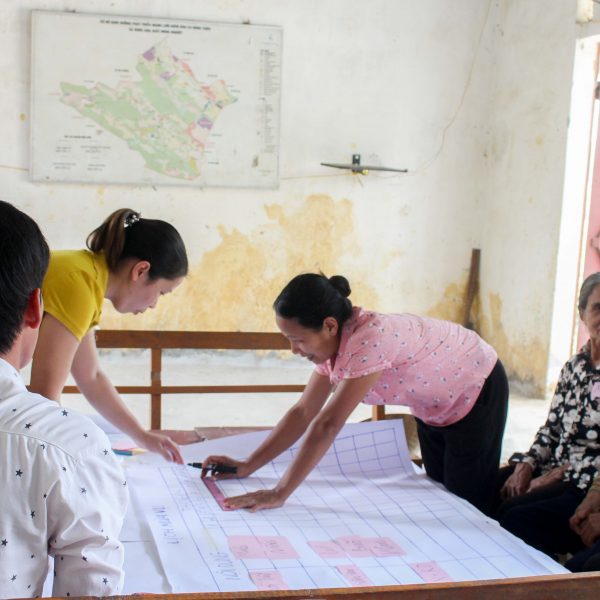 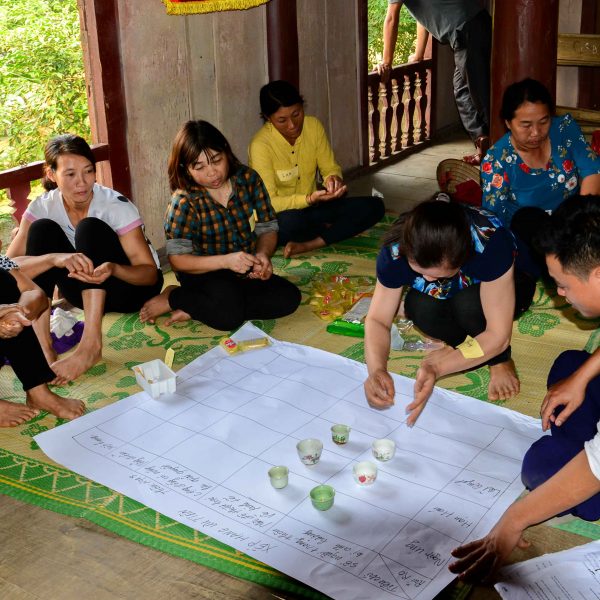 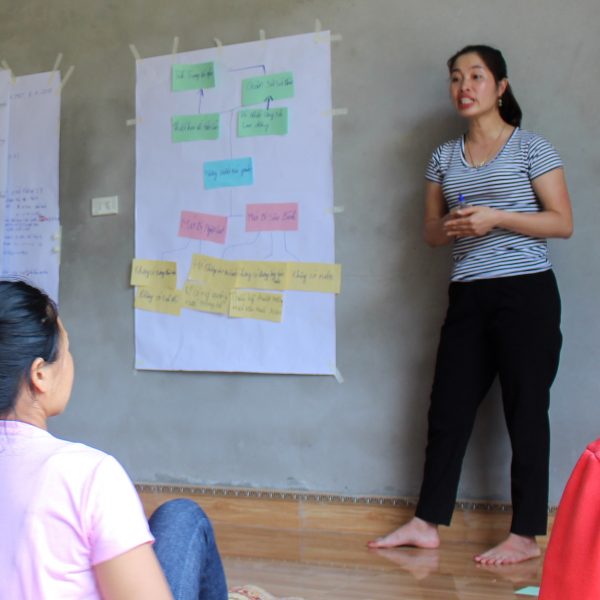 The villagers, Muong people, provide the information via the participatory tools facilitated by the participants trained for 5 days before

The consultant group from CAB is especially grateful to those who invented and who have always encouraged the use of participatory learning and action process as well as the methods and tools for this divine participation!

Consultancy activities are within the framework of the project “Promotion of disability inclusive and disaster prepared communities in Nho Quan” in Ninh Binh province of AFV in cooperation with Nho Quan District People’s Committee funded by CBM.